EILEEN PIPER the mother of church sexual abuse suicide victim Stephanie Piper, has accused Cardinal George Pell of physically assaulting her own brother, Monsignor Kevin Toomey, warning him to back off from his niece’s case.

The indefatigable 95-year-old, who is in COVID-19 lockdown at her home after a brief stint in hospital after a fall, wants to make a statement to Victoria Police about the assault.

She is distressed that the assault was not raised in her private interview with the Royal Commission into Institutional Responses to Child Sexual Abuse.

Further, she is distressed that the matter has not already been properly examined by Victoria Police, including the Sano Task Force.

She is adamant that she still wants the matter to be tested in court in the interest of justice not only for Stephanie, but for the thousands of other victims, families and advocates; especially those injured by Pell directly and/or those injured by Pell’s lies and cover-up of sex abuse by the church, including his own crimes, as matters stand on this day.

IA remains committed to telling the stories of victims and in this instance, this writer holds that no-one save the victim has proprietorial control over Piper’s rights to report and discuss alleged criminal conduct — especially when of a nature where it could lend credit to other allegations of force and criminal conduct involving George Pell.

Despite his incarceration, Pell remains both a powerful physical and jurisdictional imposing presence of the Catholic Church and the establishment, and is known to conduct his affairs from behind prison bars, in not dissimilar ways to gangland bosses effectively administering their daily business operations from "inside", albeit under Her Majesty’s escutcheon.

It is feasible that had the true extent and facts involving Pell’s alleged thuggery and bullying been brought before the courts earlier, indeed aired before the Royal Commission itself, that further victims may have stepped forward to corroborate other allegations made against Pell.

In a series of interviews and discussions with Independent Australia, Piper says she will not be silenced by the church, or anyone else for that matter and made it clear that she believes that competing players for her exclusive story have led to the extent of the assault being suppressed.

She says that an exclusive interview with another journalist has been granted — but not by Eileen herself. IA understands from Piper that the interview was planned to coincide with the publishing of a book about Eileen’s case.

But Piper says she wants the truth to come out — and before tomorrow’s High Court decision is pronounced. “I will not be silenced. I want this out. And I want it out now. I’ve always wanted it out. I’m not scared of anyone. I’m not scared of the Church.”

Moreover, Piper wants to confront Pell in Court, to appear on an equal footing with him.

Further, she seeks a personal apology from Pell, for the assault on her brother — and for other misdemeanours he has overseen and orchestrated, concerning her beloved daughter Stephanie and the Church’s disgraceful handling of Stephanie’s serial raping and kidnapping by the notorious paedophile rapist, Father Gerard Joseph Mulvale.

As a deacon and after his ordination into the small Pallottines Order, which has the dubious distinction of having the fourth highest rate of Catholic institutional sexual abusers in its ranks, Mulvale ran the St Christopher’s youth group for girls and boys at Syndal, in Victoria’s eastern suburbs.

Thus he had the pick of the youngest and the lowest hanging fruit in this Garden of Evil.

Whilst an incident has been referred to in Louise Milligan’s compelling book, Cardinal: The Rise and Fall of George Pell, there is no mention of an assault.

Here is the pertinent extract:

At that time, Pell was based in Mentone, about half an hour from her brother's home, but she says he seemed to arrive very quickly at Toomey's door. "And I saw George Pell beckon with his hand, to tell me to go out, to get out of the room."

Eileen did what she was told. "I sort of skittled into the bathroom, which was the adjoining room." She was shocked by what happened next. "I heard George Pell say to my brother, 'Don't you dare have anything to do with your sister's case, now that's an order.'

PIPER SAYS PELL GRABBED HER BROTHER BY SHOULDERS, SLAMMING HIM AGAINST WALL

She said it was a terrible sight, made her sick in the stomach and made her cry uncontrollably. It also made her feel guilty that her beloved brother, who died in 1999, was bearing the brute force and unambiguous threat manifest in Pell’s visit. Eileen had always known what she had been up against insofar as the church’s intransigence to admit liability for their crimes perpetrated upon her daughter, but Pell’s conduct shook her to the core.

PELL UNABLE TO BREAK THE BOND BETWEEN BROTHER AND SISTER

Pell may not have tattoos, but he bears the stigmata of a Jesus he crucified and he believes in a vengeful god, that is clear.

Despite Pell’s brutal assault, Toomey, like Eileen, refused to cower to Pell. Eileen says that Pell failed to break the bond between this brother and sister and that Kevin accompanied Eileen to court.

For decades, some of us have been trying to break through the once impenetrable tungsten tabernacle of power that still surrounds the Catholic Church and Pell. Remember, Cardinal George Pell aspired to be the first Australian pope and so easily could have been.

But despite its tensile strength, tungsten is brittle and can shatter upon impact. Such has been the true aim of Eileen Piper’s slingshot. Loading it up with her steely cannon ball made of perhaps the world’s most precious metal — a mother’s unconditional love for her child. Her cannon was true. It was ultimately to destroy the canon of the Catholic Church insofar as her fight for justice for Stephanie was concerned.

This canon went something like this — and it is a mantra heard by so many victims: "She’s an old lady. She hasn’t got much longer to live surely. Let’s string this out for as long as we can so that she dies and we won’t have to make a payout."

Taking aim against the Goliath that is the amalgam of George Pell and the Catholic Church, she aimed to hit him – and it – right between the eyes and the lies.

Fearless and peerless in her quest for justice for Stephanie, and the rightful compensation that the Church owes not only victims but their families and partners, including those hundreds who have suicided and self-harmed, this diminutive grandmother with the brave heart and tenacity of a lioness – the energy, activism, agile intellect, and a sense of what is just and what is justice – puts so many of us to shame, myself included.

The Melbourne Archdiocese recently settled with Eileen Piper over her longstanding compensation claim against the Catholic Church. Her lawyer, the formidable, tenacious Judy Courtin, wrote about her extraordinary client and case for Independent Australia.

This is a legal and redress pity for several reasons. There is an outrageous discrepancy between original compensation sums offered to Piper – and the final settlement – and much of this unquestionably has to be attributed to Courtin’s legal prowess as well as Piper’s doggedness.

There is the legitimate allegations of facilitating cover-ups insofar as payout sums are concerned. It surely goes against the spirit of the Royal Commission recommendations.

The secrecy, however, casts a pall on those of us fighting for more decent and honourable redress for victims. We all should know what the payouts are; so that other victims and legal representatives can get a handle on the shrewd and conniving machinations of the Church and its supporters, legal and otherwise, who for years have been colluding and assisting in the cover up of sexual abuse.

In such confidential clauses, there is often this imperative — an imbalance of power. Usually the powerplay is in favour of the payee.

It is unclear if Piper’s allegations against Pell had any bearing on the compensation payout sum.

If so, could such payouts, which include the suppression of payout sums, be in any way interpreted as hush money? This is a legitimate question, and needs more public discussion and scrutiny.

Eileen herself has not taken a vow of silence in terms of general discussion of these and other issues.

She’s up for the good fight. Even now.

In fairness, there is a lucid argument to be made in favour of signing a confidentiality clause in Eileen Piper’s case, not because of her age, but because the duress she has already endured.

Although IA knows from insiders that the Church was indeed hoping that Eileen would die before this, alternatively, why should we as a community expect her to fight for the removal of the clause, given the mighty effort she has made on behalf of the greater community, its well-being and justice itself — and most importantly her love and commitment to her child, Stephanie? 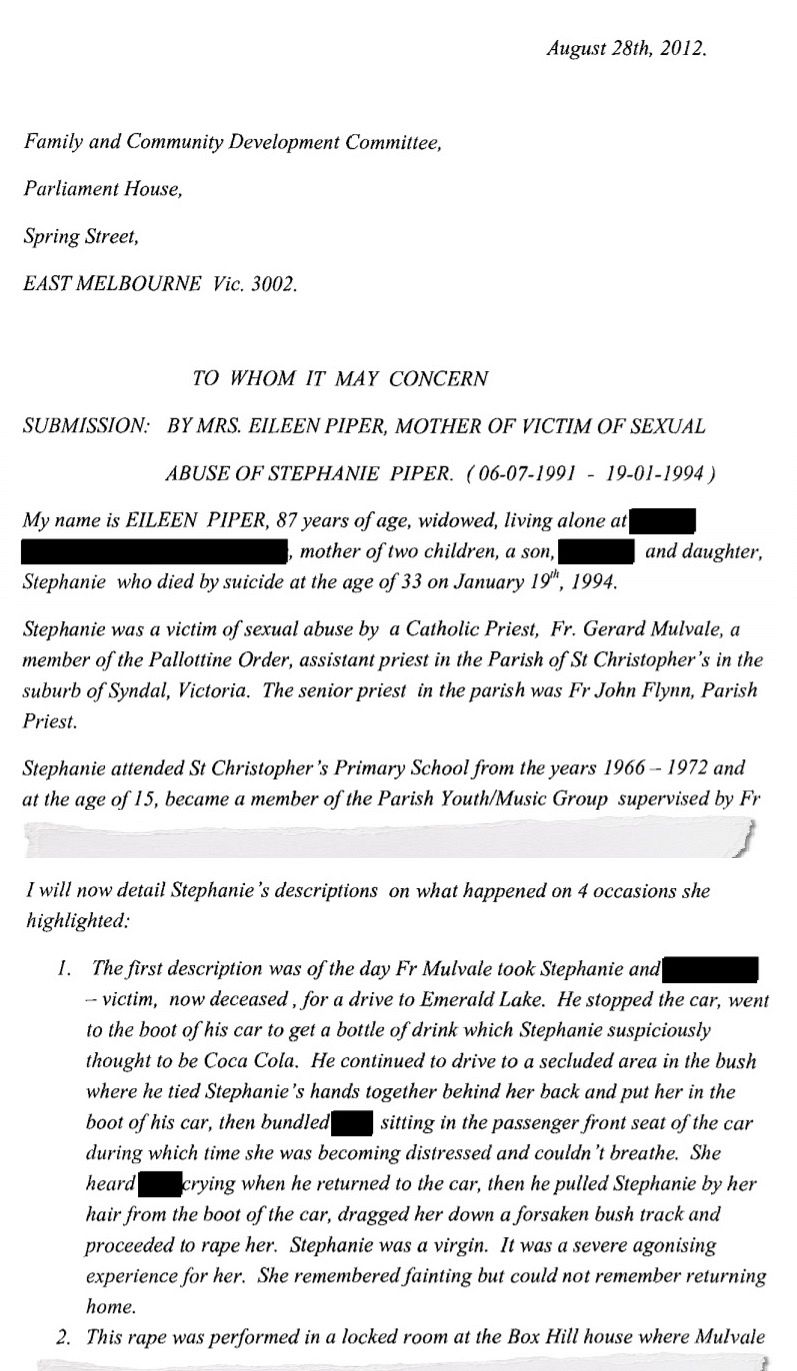 Please read the entire of Eileen’s submission, as gruelling as it is for us to read. Stephanie, Eileen and her family had to live through this — and still do.

Stephanie however, was to choose death over life. She’d already attempted to take her own life. This time she succeeded. In her mother’s words to the submission:

There is so much more to Stephanie’s story — and that of her staunch and loyal champion, her mother Eileen Piper.

Like that other mother, Chrissie Foster, Eileen Piper’s silence cannot and will not be bought with any cheque, no matter the amount, from the Catholic Church. It will always be dirty money.

It will always be contaminated by the virulent virus of sexual abuse of their children by priests of the Catholic church, and no amount of hand sanitiser will kill this contagion or eradicate this particular sexual disease transmitted in the name of Jesus and God the Father Almighty and promulgated in His name.

What would Jesus say? I reckon he would say “Fuck you, George Pell.”

The High court will deliver its decision in Brisbane tomorrow at 10am.