It is our national shame that 65% of imprisoned 10 to 13-year-olds are Indigenous, when our kids are only 6% of Australia’s youth population

‘Over-incarceration and deaths in custody continue to be the legacy of Australia’s history, built into the very foundation of this country since colonisation.’ Photograph: Joel Carrett/AAP

Each year, I feel that familiar knot in my stomach as 26 January, Invasion Day, approaches, knowing it will bring racist and divisive comments and heavy scrutiny of First Nations’ peaceful protests.

But we have to remind the broader community why we are exercising our democratic right to protest (with Covid-safe precautions). We can’t celebrate on 26 January while our people face ongoing human rights injustices. Particularly for our young people, who are our future warriors, our hope for self-determination, protection of country, continuing our culture. One clear solution governments can implement right now for the future of our young people is to raise the age of criminal responsibility.

Right now, all Australian governments are failing Aboriginal and Torres Strait Islander young people. Every state and territory is locking up children as young as 10. It is our national shame that 65% of imprisoned 10 to 13-year-olds are Indigenous, when our kids are only 6% of Australia’s youth population. Most of these imprisoned children are also in child protection, and are living with a disability, including cognitive disabilities.

Every time governments lock up our children, they take away their future. No child belongs in prison; the horrors of Don Dale are an endless reminder of that. If a child is in prison it is because the government failed to provide them and their families with holistic and culturally safe wrap-around supports. It is because our children are over-policed, targeted and pushed into the justice system from racism, disadvantage and poverty. It is the legacy of colonisation.

Since the violent foundation of this nation, Aboriginal and Torres Strait Islander children have been imprisoned and abused, and have died in custody. Boys under 16 were imprisoned and died at Wadjemup (Rottnest Island) prison from 1838, a prison purpose-built for Aboriginal people and the largest deaths in custody site in Australia.

In 1983, John Pat was only 16 when he was found dead in a police station, sparking the royal commission into Aboriginal deaths in custody, whose recommendations remain unimplemented 30 years on. GJ Roe was heartbreakingly only 11 when he took his life under police curfew in Carnarvon in 1997. In 2018, Christopher Drage and Trisjack Simpson were only 16 and 17 when they died in Perth’s Swan River while being pursued by police. There is no peace for their families until there is justice and accountability for the deaths of their children.

I thought of these families last week as 31 United Nations member states condemned Australia’s treatment of First Nations people and recommended raising the age of criminal responsibility to at least 14, during the UN’s Universal Periodic Review.

If Australia had done this decades ago, maybe these children would still be alive, because we know that the earlier a child is trapped in the justice system, the more contact they will have with police and prisons. That’s why raising the age is one step that all Australian governments could take right now to immediately – and for generations to come – reduce the injustice of over-incarceration of Aboriginal and Torres Strait Islander kids.

The United Nations has urged Australia to consider the established medical science which supports this. The ACT and NT governments have committed to raising the age, but we are yet to see action. Last year the Council of Attorneys General said their inquiry into raising the age had been delayed due to a lack of understanding of alternatives to imprisonment.

But there are so many Aboriginal-led solutions, diversion and bail support programs and community justice initiatives. There are recommendations for change stemming back to the royal commission 30 years ago. More recently, the Northern Territory royal commission’s findings and Koori Youth Council’s Ngaga-dji (hear me) report set out many culturally safe solutions. 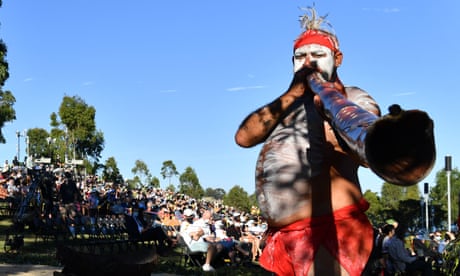 Western Australia’s Aboriginal Legal Service youth engagement program has helped more than 150 children out of the quicksand of the justice system. Justice Reinvestment in Bourke, New South Wales, has proven results, with a 31% increase in year 12 student retention rates and a 38% reduction in charges across the top five offences for young people. Unfortunately, many of these initiatives do not have continued funding, such as Victorian Aboriginal Legal Services’ Balit Ngulu youth legal service, which saw powerful results.

We know our kids shine when they are connected to culture, country and community. Instead of building prisons in which kids suffer abuse and harm for life, we need governments to build futures.

Over-incarceration and deaths in custody continue to be the legacy of our history, built into the very foundation of this country since colonisation, upon the blood and bones of our people. Until that changes, there is nothing to celebrate on 26 January, or any other date. We cannot let the shackles of our past hang around the necks of our future.