The Australian government announced a major change to a policy that impacts child welfare last week. From 1 January, unemployment benefits will drop by $100 a week.

The reduction of the coronavirus supplement was not described as a child welfare policy by either the government or the media. But to the new national children’s commissioner, Anne Hollonds, the link was obvious.

“Of course it is about kids,” Hollonds says. “We know that the financial circumstances of a family have an impact on the wellbeing of children,” she says. “And the stress experienced by parents because of their economic insecurity and trying to put food on the table every day … that affects the wellbeing of children. Living with stressed-out parents, having insecure housing, all of that affects children.”

It’s an obvious point, but one Hollonds says has been missing from the national conversation. In political terms, children and families are often viewed as soft areas of policy, a basket of issues to be considered on top of, and not as part of, the hard economic debates. It’s a false division, Hollonds says. 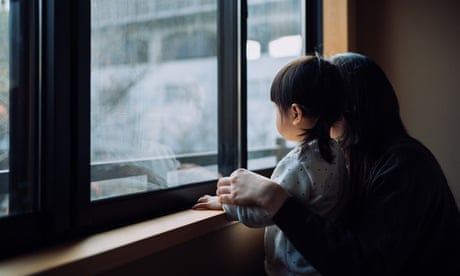 A decades-long crisis: the battle to fix Australia's 'broken' family law system“For me this is not a soft area of policy,” she says. “It’s often shoved to the periphery of things, but for me social and economic policy go hand in hand.”

Take the jobkeeper supplement, which was designed to keep adults connected to work and businesses afloat. “All of that helps kids,” Hollonds says. “We seem to be a bit shy at pointing out that these sorts of big spending initiatives actually are helping to promote the wellbeing and the rights of children.”

Put simply: children do not exist on their own. What happens to their families, their parents and their communities affects them.

Hollonds began her five-year term as national children’s commissioner this month after five years as director of the Australian Institute of Family Studies. Her first fortnight on the job has seen a new crisis occur every day: child death reviews; horrific family violence cases; and the exposure of a global paedophile ring with 46 Australian victims.

“Every time there is a tragedy we jump on it and we reform a piece of it, whereas really we need to put our gaze much higher and look at the systems that are impacting on the lives of children and their families,” she says. “Often it’s the intersection of those systems where things can go wrong.”

The systems that are currently in place are fragmented across jurisdictions and government departments.

“They are not able to self-correct, so everything we’re doing is a late reaction,” she says. “I’m not interested in just more reviews and more 500-page reports that point out the same things. I am looking for what can be done in terms of actual action now.”

Hollonds started her career in the child protection sector, a role that she says exposed gaps in government systems that were designed to support families. Different support services – for family violence, drug or alcohol addiction, adult mental health, homelessness – were siloed into different government departments, kept apart by a thorny wall of bureaucracy.

“When I was a child protection worker, I had never met a parent who did not want to be the best mum or dad they could be,” she says.

“The parents always had aspirations and love for their children, even when we had to remove the children from their care. And I was very aware when I was doing that work – and I was young, I was 21 – I was very aware how limited my options were as a child protection worker but also the system I was working in.

“We didn’t have ways of really helping these parents to achieve their aspirations to be the best mum or dad they could be or provide for the wellbeing and development of their children.”

Despite recent efforts in some jurisdictions to encourage coordination and cooperation between services, it remains a highly fragmented landscape.

“It’s a lottery where you’re born in Australia as to what kind of support and services you can get,” she says. “We really need better – well, we need some. Not even better. We need any national coordination of the systems and the policies that impact on the lives of our children.”

Often, Hollonds adds, the systems set up to protect and ensure the care of children – like the family law system – fail to properly address their needs. She agrees with a recommendation made by the Australian Law Reform Commission last year that the presumption of “equal shared parental responsibility” be removed from the Family Law Act, and replaced with a presumption of “joint decision making about major long-term issues”.

The existing presumption, she says, has not been properly understood by the public and hasn’t necessarily served the best interests of children. As chief executive of Relationships Australia in NSW, she used to run the family relationship centres that were set up when the legislation was changed, requiring couples to undergo mediation, or be assessed for mediation, before filing their matter to the court.

Family law inquiry is no sop to Hanson. It's a deliberate move to bury previous reviews

“I just always recall people arriving at our centres saying: I am here to get my 50-50,” she says. “It had been understood in those terms. Or even ‘my lawyer sent me to come and get my 50-50’. So there’s been issues with that clause from the beginning and better minds than mine have said that it needs to be reviewed.”

The ALRC review was swiftly followed by another parliamentary inquiry into the family law system, led by the One Nation senator Pauline Hanson. The journalist Jess Hill, who has written a book about family violence and the family law system, has argued that the Hanson inquiry has served to bury the outcomes of the ALRC inquiry and another parliamentary inquiry, which both centred the rights of children over a gendered debate about the rights of fathers.

Hollonds would not comment on the politics but said the rights of children should always be central.

She has been tasked with writing the new National Plan for Protecting Australia’s Children and says she will take her cues from the new Closing the Gap strategy, which introduces measurable accountabilities for states and territories. “I want to get us to move to action as quickly as we can,” she says.

She also wants the policy to be elevated to a cabinet level, and subject to the same kind of national coordination that was applied to responding to the coronavirus pandemic.

“It’s now acknowledged that to respond to significant crises you’ve got to have national coordination,” she says. “If we don’t see the things that are happening to our most vulnerable children in Australia including First Nations children, as crises in our systems that are meant to protect them, then I don’t know what is. That national coordination is absolutely critical for me.”