Scott Morrison has responded to an impassioned speech by the Swedish teenage climate activistGreta Thunberg at the United Nations by declaring the climate change debate is subjecting Australian children to “needless anxiety”.

The Australian prime minister, who will address environmental themes in his address to the UN general assembly on Wednesday, including ocean management, plastics, waste management and illegal fishing, was asked for his response to Thunberg’s excoriation of world leaders at this week’s climate action summit, when she accused the political class of failing the younger generations.

Morrison told reporters he acknowledged “how deeply people feel about this issue” but said the public debate was replete with disinformation about Australia’s climate change policies. 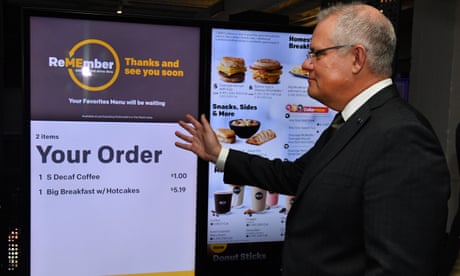 “It often comes as news to people when I share with them Australia has the highest per capita investment in renewable energy of any country in the world,” Morrison said – in the process neglecting to mention that his predecessor Tony Abbott had tried to wind back the renewable energy target, which triggered an investment strike.

Morrison said he would use his looming address to the UN – his final public commitment before leaving New York for Australia on Wednesday – to address the lack of awareness about “the action Australia has been taking”.

“I do understand that people feel strongly about this, but I think we also have to take stock, we have to ensure we get a proper context and perspective,” Morrison said.

“I want children growing up in Australia to feel positive about their future, and I think it is important we give them that confidence that they will not only have a wonderful country and pristine environment to live in, that they will also have an economy to live in as well.

“I don’t want our children to have anxieties about these issues.”

Asked whether Australian children would be less anxious about the worst-case scenarios associated with climate change if Australia’s greenhouse gas emissions were falling instead of rising, and if the Morrison government would make a clear commitment to reaching net zero emissions by 2050, the prime minister said kids needed to be given “context and perspective”.

He acknowledged that he spoke to his own daughters, aged 10 and 12, about climate change. “We don’t have deep conversations about emissions reduction targets and what’s happening with the Kyoto protocol and Paris, but we talk about fossil fuels and we talk about what they learn at school, and I encourage them to have a passionate independent view about how they see the world, but I also give them a lot of context.

“I don’t allow them to be basically contorted into one particular view. I like them to make up their own mind but I also like to give them reassurance because the worst thing I would impose on any child is needless anxiety. They’ve got enough things to be anxious about.

“We’ve got to let kids be kids. We can’t have them growing up as mushrooms, but we’ve got to get a bit of context into this.”

Morrison said being present at the United Nations should also serve as a reminder that the world was fully capable of solving vexed problems and responding to existential threats. “Australia has dealt with so many issues in the past, and the world has dealt with so many difficult issues in the past, and here [at the UN in New York], we are reminded of that.” 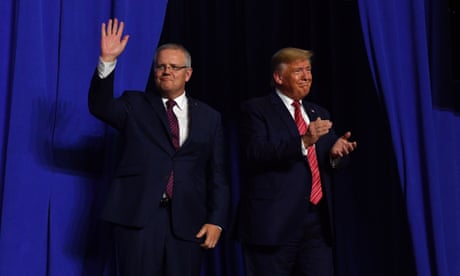 Australian observers in New York have told Guardian Australia Morrison’s failure to attend a UN climate action summit on Monday despite being in the US, and his apparent rejection of the need for Australia to do more to address its rising greenhouse gas emissions, had eroded goodwill for the country on the issue.

Bill Hare, the chief executive and senior scientist of Climate Analytics and a longtime adviser to countries at climate talks, has dismissed Morrison’s argument this week that China had to be treated as a developed economy in the context of climate change and embark on more ambitious emissions reduction as a “ridiculous fake argument”.

Hare said China, the world’s most populous country and biggest annual polluter, was not doing anywhere near enough to tackle the crisis, but was doing more than Australia on many measures. It had national policies in a number of areas – boosting renewable energy, energy efficiency, electric vehicles and efficiency in industry – where Australia did not.

Greenhouse gas emissions have been rising in Australia since the Coalition repealed Labor’s carbon price despite the country’s commitments to reduce pollution under the Paris agreement. Total national emissions have increased each year since 2014.

The government says it will meet the commitments made under the Paris agreement, but its carbon pollution roadmap for doing so shows Australia is relying on a 367 megatonne abatement from carry-over credits (an accounting system that allows countries to count carbon credits from exceeding their targets under the soon-to-be-obsolete Kyoto protocol periods against their Paris commitment for 2030) to help meet the 2030 target.

The indicative roadmap for emissions reductions to 2030 includes an electric vehicle strategy that the government has not yet unveiled, and the government has also booked just under 100Mt of abatement to “technology solutions” that are not specified.

Morrison signed a communique at the Pacific Islands Forum that included a commitment to “formulate and communicate mid-century long-term low greenhouse gas emissions development strategies by 2020” – but asked this week whether he would deliver on that undertaking, the prime minister hedged.

Renewables have boomed after rebounding from the Abbott government’s efforts to dismantle the renewable energy target, but a recent forecast from the industry warned that investment has slowed right down in the absence of policy certainty in climate and energy.

The Coalition abandoned a key policy mechanism for the electricity sector – the national energy guarantee – in the middle of the conservative-led strike on Malcolm Turnbull’s leadership.

The forecast from the Clean Energy Council says the large-scale RET, which winds down after 2020, led to 15,700MW of new capacity being financially committed over the past two years, with that generation either under construction or recently commissioned.

“But with the absence of policy certainty beyond the 2020 RET and a range of regulatory barriers to overcome, investment commitments in new generation have fallen dramatically this year,” it said. “Quarterly investment commitments in new renewable energy projects reached a high of over 4500MW in late 2018, but has since collapsed to less than 800MW in each of the first two quarters of 2019.”

As the climate crisis escalates...

… the Guardian will not stay quiet. This is our pledge: we will continue to give global heating, wildlife extinction and pollution the urgent attention and prominence they demand. The Guardian recognises the climate emergency as the defining issue of our times.

We chose a different approach: to keep Guardian journalism open for all. We don't have a paywall because we believe everyone deserves access to factual information, regardless of where they live or what they can afford to pay.

Our editorial independence means we are free to investigate and challenge inaction by those in power. We will inform our readers about threats to the environment based on scientific facts, not driven by commercial or political interests. And we have made several important changes to our style guide to ensure the language we use accurately reflects the environmental catastrophe.

The Guardian believes that the problems we face on the climate crisis are systemic and that fundamental societal change is needed. We will keep reporting on the efforts of individuals and communities around the world who are fearlessly taking a stand for future generations and the preservation of human life on earth. We want their stories to inspire hope. We will also report back on our own progress as an organisation, as we take important steps to address our impact on the environment.