Prime Minister Scott Morrison has laid out exactly what needs to happen for Australia to start to return to life as we knew it.

Prime Minister Scott Morrison says “Australia is on the road back” towards life before coronavirus.

Speaking to reporters in Canberra on Tuesday afternoon, the PM announced he was lifting restrictions on elective surgery next week, including IVF and dental.

Mr Morrison outlined “clear markers” that Australia still needs to meet in order to ease restrictions on social distancing that have helped save lives and flatten the curve.

“We laid down some clear markers as to what the requirements would be. We said there needed to be an effective rate of transmission less than the score of 1,” he said. “And we said we need to get in place over these four weeks that we’re now in — almost one week down in that timetable of testing, tracing and a response capability on the ground. “National Cabinet will continue to look at those areas that may be able to be eased at the end of that period when we look at those issues. But they are the clear markers. They are the clear prerequisites. There is no uncertainty about that. I think that’s very clear.

“An effective rate of transmission consistently under 1 and putting in place the testing and tracing and response capabilities that are necessary for us to stay on top of any outbreak or any risks that could emerge.”

He said two-thirds of Australia’s coronavirus cases have “been overcome” and that the national figure was now around 2500 active cases.

And he would not be drawn on reports about whether May 11 was the government’s preferred date for easing restrictions.

“I wouldn’t read too much into that,” he said.

“We are on the road back and I think we have already reached a turning point on these issues provided we can keep the controls in place to keep the virus under management. It will continue to write its own rules and it is provided, we think, that we stay on top of it.”

Health Minister Greg Hunt reiterated Australia was doing everything right to get back to life as normal. 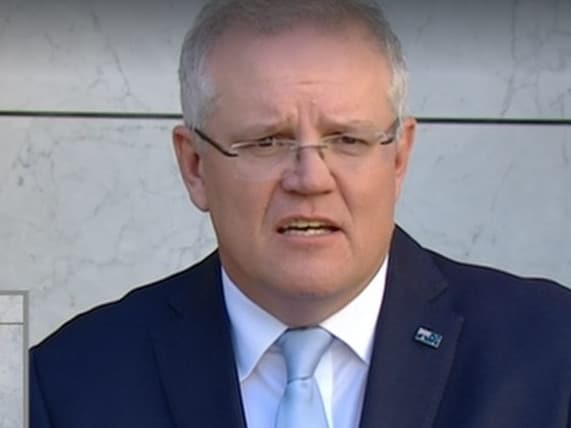 Scott Morrison could not have been clearer: ‘Australia is on the road back’. Picture: SuppliedSource: Channel 9

“Today is an important day on the road back,” he said.

“There is progress on all three fronts. On containment, capacity and recovery. And it is the progress on those first two fronts of containment and capacity which allow us to take these steps on the road to recovery through greater freedoms and opportunities for elective surgery, which will mean such an enormous amount to Australians in need of health assistance.

“Less than 1 per cent growth in cases for nine consecutive days and over the last three days we have had averaged less than half a per cent of both in new cases.

“This is a collective national achievement but every Australian has been contributing and I want to say thank you for what people have done. You have made this happen. You have helped Australia lead the world.”